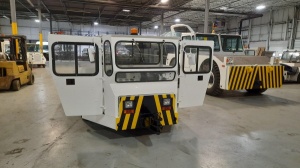 Global GSE has a wide variety of used aircraft tugs/ pushback tugs for sale. We also have smaller baggage tractors that can be used for moving small aircraft. With over 150 aircraft tugs/ pushback tugs and baggage tugs for sale, we are sure to have the right tug to meet your needs. If you do not see what you need here, please contact us as we have new stock arriving weekly.

Global GSE has a wide variety of used aircraft tugs/ pushback tugs for sale. We also have smaller baggage tractors that can be used for moving small aircraft. With over 150 aircraft tugs/ pushback tugs and baggage tugs for sale, we are sure to have the right tug to meet your needs. If you do not see what you need here, please contact us as we have new stock arriving weekly.

In aviation, pushback is an airport procedure during which an aircraft is pushed backwards away from an airport gate. Pushbacks are typically carried out by special, low-profile vehicles called aircraft pushback tractors or aircraft tugs.

Generally, pushback tractors and airport tugs use a low-profile design to fit under the aircraft nose to reduce the possibility of accidental contact with the aircraft being pushed back. Some of the older models available were not low-profile tugs and special care was needed to be taken when pushing aircraft back using these type of airport tugs due to the increased height profile. For sufficient traction the pushback tractors are typically very heavy to provide good ground contact, with low gearing to provide the required torque to get a large aircraft moving. A typical tractor for large aircraft can weigh up to 60 tons. Braking systems on these tugs tend to be very powerful in order to safely stop the pushback tractor and aircraft. Depending on the type of pushback tractor the driver's cabin can be raised for increased visibility when reversing and lowered to fit under aircraft. Some aircraft pushback tractors have driver positions at both ends of the tug, to ensure good visibility when connecting the towbar to the aircraft and pushing back as well as when towing the aircraft longer distances. There are two primary types of pushback tractors: conventional and towbarless (TBL). Some modern remote-control aircraft pushback tugs are now appearing in the market place. These pushback tug units are typically electric powered utilizing onboard batteries which also provide ballast for the aircraft tug.

Towbarless pushback tractors physically lift the aircraft nose wheel off the ground in order to move the aircraft. They hydraulically raise the nose landing gear, allowing the tug to maneuver the aircraft without connecting anything to the nose landing gear. This allows better control of the aircraft and higher speeds. The main advantage of a towbarless tug is its ability to connect to various aircraft types without the need to have multiple towbars available. The physical action and coordination required by the tug operator to move an aircraft with a TBL tug is less complicated and easier to learn than with a tug and towbar. By connecting the tug directly to the aircraft's landing gear tug operators have better control and responsiveness when maneuvering. This is most advantageous in general aviation settings where operators are often required to move more types of aircraft more often into more confined spaces than their airline counterparts.

Manufacturers of electric TBL tugs offer models capable of moving any aircraft from the smallest single-engine type through narrow-body, military cargo aircraft and wide body aircraft. Just as specialized towbars are required for a wide range of aircraft, many TBL tugs use adapters which enable the movement of many unique aircraft. The majority of aircraft do not require adapters and can be moved without any special adjustments to the tug. This is in contrast to conventional tugs which often use so-called "universal" towbars which must have multiple towing heads to suit each aircraft type that is towed. Electric TBL tugs are gaining popularity among general aviation operators and FBOs as an alternative to gas or diesel-powered conventional tugs. Being electric rather than internal combustion-powered, electric tugs are low-emission which is a major advantage for environmentally-conscious operators; this also enables the tug to be safely operated inside a closed hangar. With modern battery technology improving the use of battery powered aircraft pushback tractors and tugs will likely increase.